One can disapprove of Kangana Ranaut’s twisted ways of putting forward her opinions and theories and even disagree with her POVs, but no one can deny the talent and brilliant theatrics she brings to the table.

From Queen to Manikarnika to now Thalaivii, she has shown that she doesn’t need Khans and Kapoors or any Bollywood biggies to make her film a superhit. 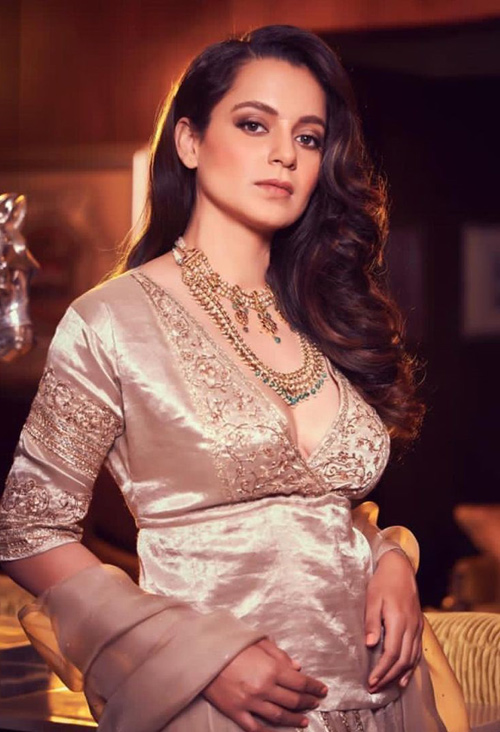 Speaking of whom, Ranaut has, in fact, always found herself locking horns with the Bollywood biggies who she lovingly (or rather loathingly) calls the ‘movie mafia’.

From calling Karan Johar ‘the flagbearer of nepotism’ on his own chat show to calling Aditya Chopra ‘Bollywood ka thekedaar’, she has not spared anyone. 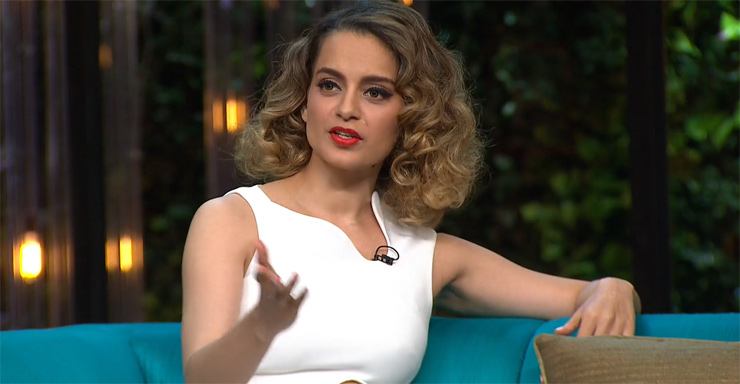 She has once again called out the “movie mafias and fake feminists” of Bollywood who haven’t appreciated her latest film and her team enough. Thalaivii, a biopic on the former chief minister of Tamil Nadu Jayalalithaa, was released on 10th September. 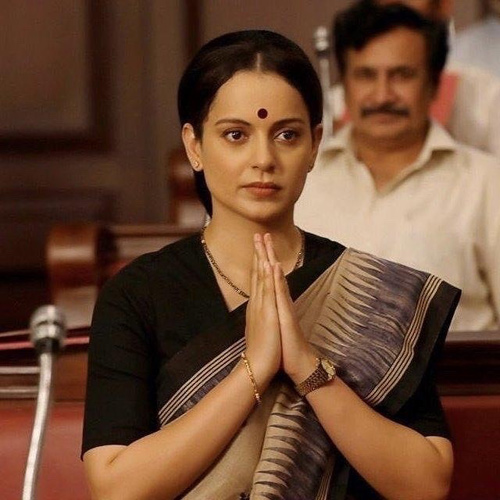 Kangana is basking in the success of the film and wrote in her Instagram stories, “Even before the release, we recovered the cost and after that all is bonus. Meanwhile, multiplexes can sulk and behave like big bullies and wait for the day they have to pay to get exclusive content like everyone else.”

She had appealed to multiplexes and cinema theatres to support her and release the film.

She added that fans have declared Thailaivii as the “movie of the year”. 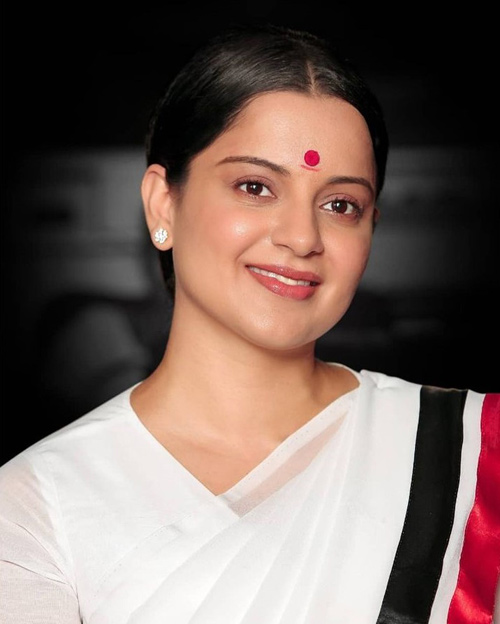 In another Insta story, she slammed the film industry for not praising the film enough and keeping mum.

“Meanwhile, movie mafia and fake feminists hiding in their hell holes had no words of encouragement or appreciation for my team who made the movie of the year but now they have started smear campaigns against the film for its limited release,” reports Indian Express. 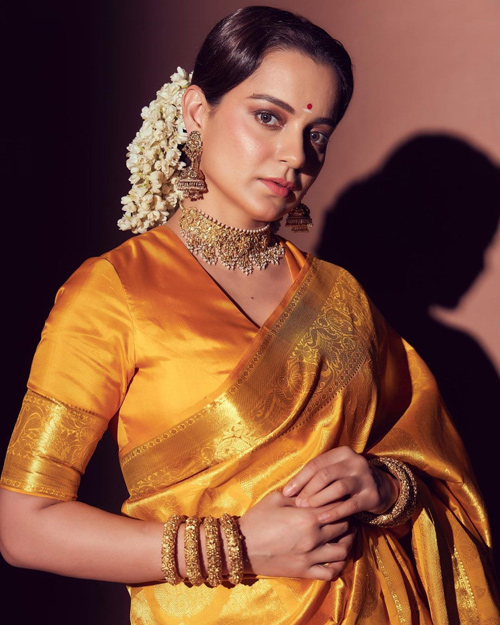 She added, “At least, we have the courage to deliver in the face of a pandemic. Remember the world or theatres won’t be the same post pandemic and your turn will also come soon. Someone had to start somewhere and we did. We must encourage each other and revive the film business and rise above pretty emotions.” 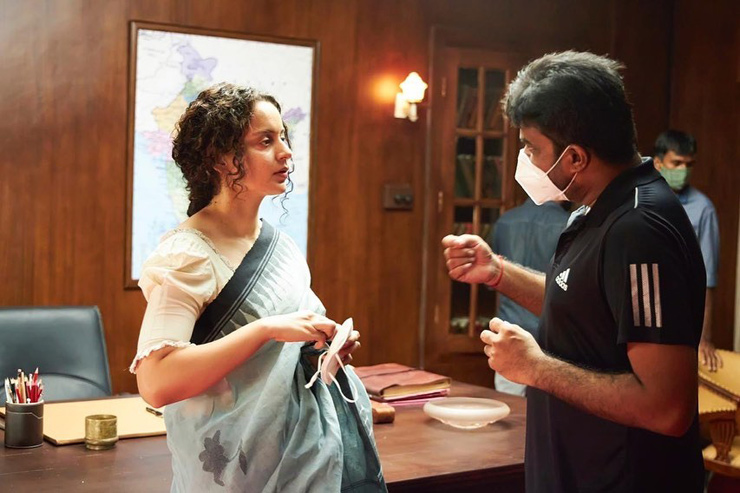 The only celebrities who have praised the movie are South superstar Rajinikanth while producer Ekta Kapoor expressed her desire to watch the film soon. She is the only one who praised Kangana and the team on social media. 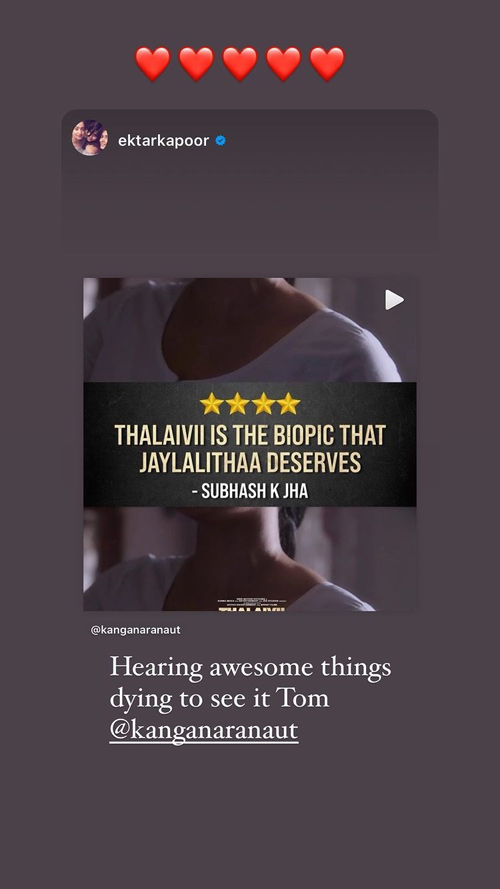 Apart from this, veteran actress Simi Garewal also took to Twitter to say, “In #Thailavii she gives it her heart & soul! Jaya-ji wanted Aishwarya to play her..my hunch is JJ wud hv approved of Kangana's portrayal.”

Altho I do not support #KanganaRanaut's radical comments..I do support her acting talent. In #Thailavii she gives it her heart & soul! Jaya-ji wanted Aishwarya to play her..my hunch is JJ wud hv approved of Kangana's portrayal. As for @thearvindswamy he is MGR reincarnate!!

In April, Kangana claimed that Akshay Kumar had made a secret call to her to laud the film’s trailer after which she tweeted, “ Bollywood is so hostile that even to praise me can get people in trouble,I have got many secret calls and messages even from big stars like @akshaykumar they praised @Thalaivithefilm trailer to sky but unlike Alia and Deepika films they can’t openly praise it. Movie mafia terror.” 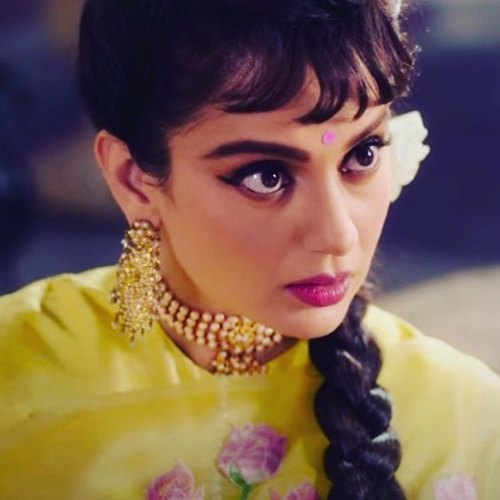 Do you think Ranaut is right and Bollywood stars and biggies restrain from appreciating Kangana’s film on social media on purpose? Let us know in the comments.